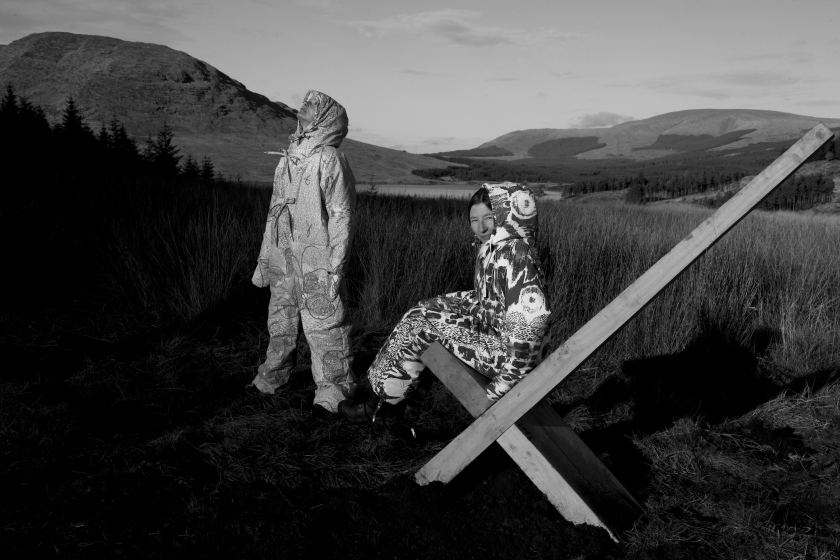 Old Scots for Earth Moon Star, this public artwork by Mandy McIntosh and Kaffe Matthews  launched in February 2013. It was developed over two years, with The Forestry Commission, for Galloway Forest Dark Sky park which was the first of its kind in Europe. The pristine views of the cosmos are due to absolutely zero light pollution in a unique natural place.Yird Muin Starn is an invitation to observe the celestial objects we never see in cities, to take shelter in the dark forest as an earth bound astronaut and to look up. The work was inspired by the Bothy movement in Scotland which voluntarily maintains free space to shelter walkers in remote places. In this work, the artists devised thermal Space Suits, reclined Sky gazers and an LP of cosmological songs and music. An artist video of the project can be found here. 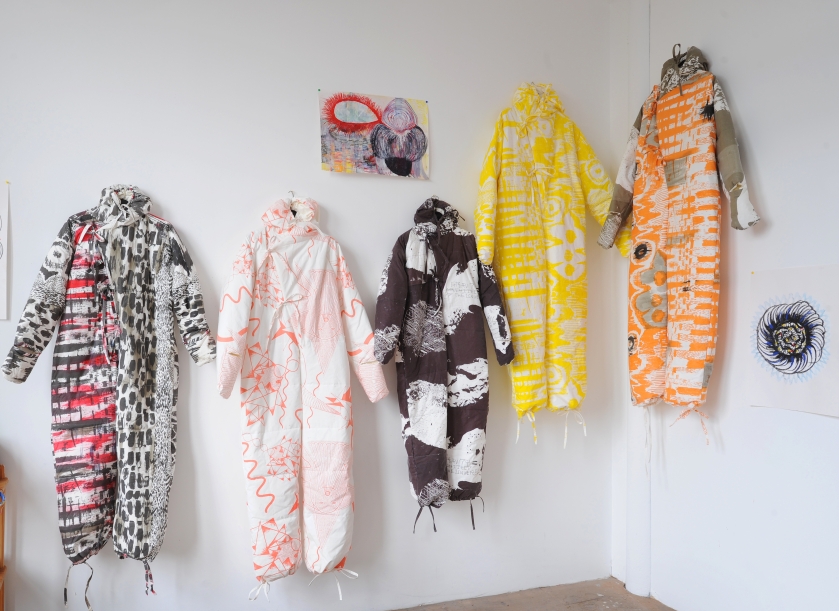 Thirteen Galloway Spacesuits were made from screen printed Ventile fabric, which is a natural, breathable, densely woven cotton, durable, weatherproof and silent. It was an integral part of the kit used by the first British mountaineering expedition to conquer Mount Everest in 1953.The suits were also padded with Primaloft and further insulated with thermal panels which had been developed for NASA spacesuits. McIntosh designed the fabrics and forms of the suits to emulate Samurai undergarments so that there were no zips or buttons. The suits could be worn outside to stargaze on bitterly cold nights, to lie on the earth and look up or to stay warm inside White Laggan bothy during Winter when the skies are darkest for longer.

The Sky Gazers, designed by Kaffe Matthews, were constructed from Green Oak, inspired by an astronomers seat at Greenwich Observatory and reclined at the same angle. They were constructed by Robin Wood using Japanese dowelling methods and the three of them are situated on a small plateau on the hill the ascends to White Laggan Mountain Bothy. They are on OS grid reference NX466775 which is on the Southern Upland Way. 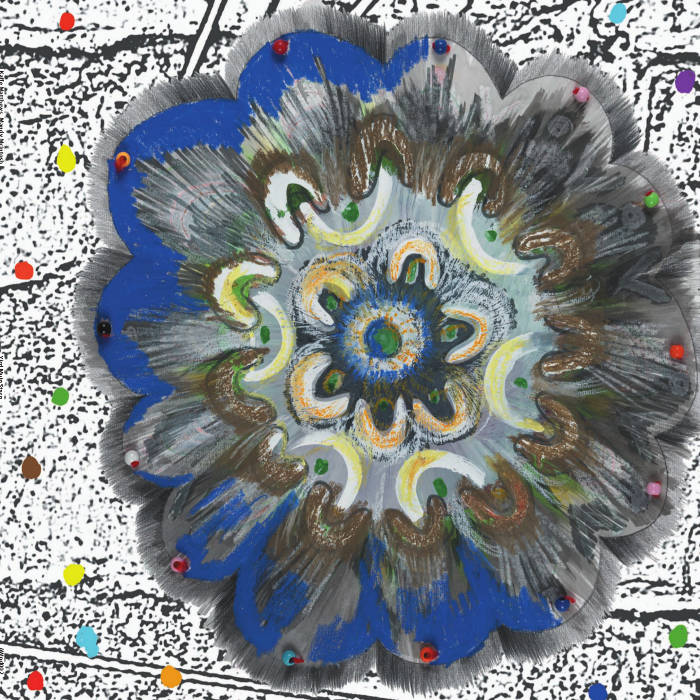 Composed and engineered by Matthews including songs written by McIntosh, the album was made from field recordings gathered all over the Galloway forest then processed using star data of regularly seen constellations, we also hear a breathless account of the Possil meteorite, (the only meteorite ever recorded in Scotland), a song about photons, a song about the depiction of the genitalia of humans on the Pioneer Plaque, and an ode to Neil Armstrong. The tunes were created using an Elka organ and fiddle together with the sonification of constellation data producing swathes of electroacoustic noise and textures, the whole work shifting from singing to hymnal pockets of throbbing space where scale is both tiny and boundless. The album is available to purchase from
https://kaffematthews.bandcamp.com/album/yird-muin-starn

The suits were in the public domain for one and a half years after the launch of the work, they were available to borrow from Cat Strand in New Galloway, Glaisnock bookroom in Wigtown and they were utilised by students of fine-art at The University of Highlands and Islandin Elgin.

For further information on The Galloway Spacesuits contact info@ham-and-enos.org.uk