Made to protest a real incident in Rugely UK 2014 where a nursing mother was photographed by strangers, posted on Facebook and labelled a “Tramp” for “letting her baby feast on her nipple just cos the sun’s out.” The term Toon Flat relates to the flat rendering of 3D imagery. Music by Artex Scar.
First screened at Solid State Cinema, The Old Hairdressers, Glasgow.

Commissioned by Animate for Channel Four Random Acts Secret Monster strand. Based on real life events in 1977, when colossal birds snatched a small boy from a field in rural America. He survived the incident but was subsequently bullied within his own community.Broadcast 2013 Channel Four and screened at Bradford Animation Festival that year. 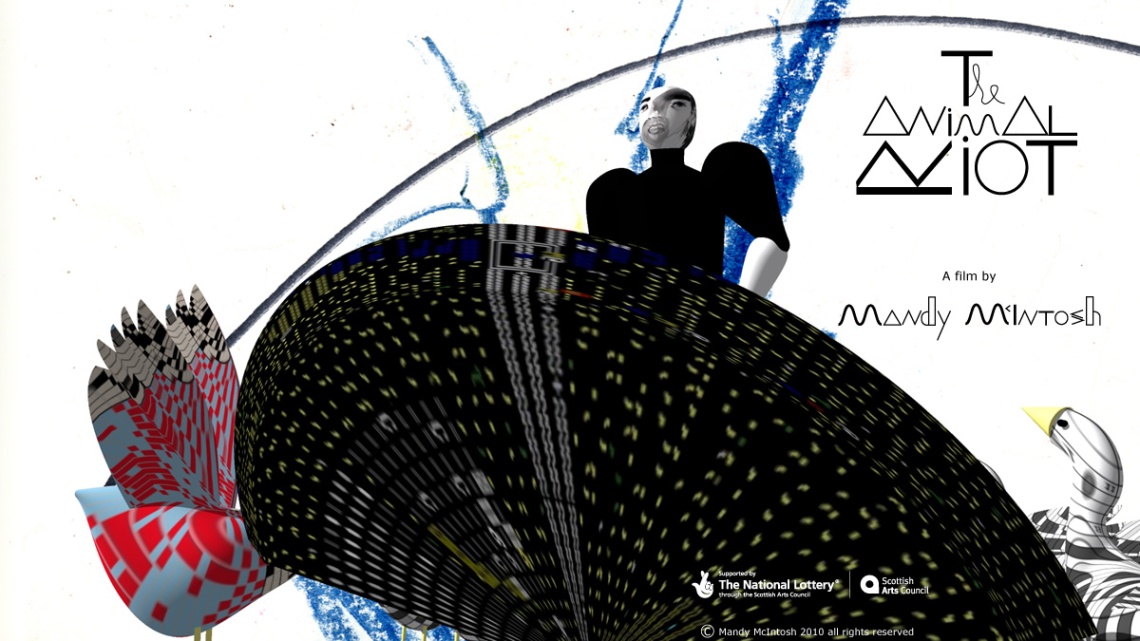 Funded by the then Scottish Arts Council artist film awards. The text of the film is abridged from the original story The Animal Riot by Nikolay Ivanovich Kostomarov. Sometimes cited as an influence on Orwell’s Animal Farm, the story of the riot was written towards the end of the 18th century, before the Russian Revolution. It has remained relatively obscure.
The film is a process of reactivation as well as an exploration of aesthetics, symbols and the marks animals make. Here, a world drawn by primates is inhabited by 3D puppets. The narrative of an animal uprising provokes an existential debate on the nature of liberty and the choices we face to either embrace or refute it. More detailed personally reflective text on the film available here. Soundtrack composed by Zeena Parkins, narrated by Aidan Moffat.
The work was premiered at A Party for Animals Kinning Park, screened at The Whitechapel with LUX NEW WORK UK, and programmed in Hors Piste at The Pompidou Paris and Hors Piste Tokyo. It also forms part of the Animate UK online exhibition programme.

Session (Sugar Version) is a multi-faceted film which revisits the room which was inhabited by a slave called Pero who served a plantation owner in Bristol’s Georgian House. The work considers how Pero’s experiences as a slave affected his mental health, the inter generational legacy of slavery on African Caribbean people and how black men specifically are treated by the UK mental health system today. Service users from a BME peer mental health support group, Two Way Street, participated in the film. Men created sugar sculptures which were installed in the house and undertook sessions in Pero’s old room with renowned art therapist Marian Liebmann. Improvised score made in the steel pan tradition with additional tracks by Shitmat and Remano Eszildn.Commissioned by Picture This, for Down at The Bamboo Club, an exhibition which marked the 200th anniversary of abolition.Session was also programmed by Torsten Lauschmann for Special Effect Bring Your Own Beamer at The Glue Factory in 2012.

The hybrid animated journey of a Scottish family leaving behind a grim 1970s Glasgow to experience a new life in Johannesburg during apartheid. The film explores segregation through an account of the relationship between the family and the black woman who cared for two immigrant girls while their parents worked. It is a document of her enduring impact on the family. Funded by Scottish Screen and The Scottish Arts Council, with an accompanying exhibition at The Paisley Museum. A poster publication with an essay by Jason E Bowman was also produced and is still available on request. Soundtrack composed by Zeena Parkins.
Oompie ka Doompie was screened at BritDoc 07, at Glasgow Film Theatre, Dundee Contemporary Artspace, Centre for Contemporary Art Glasgow, Stills Gallery Edinburgh, Ediburgh College of Art, and Basel Art Fair. It was exhibited at The Scottish National Gallery of Modern Art show “Running Time” in 2009 and now forms part of the Animate UK online exhibition programme.

Taking it’s title from the last line of Sylvia Plath’s Rhyme, Ruby Dregs was commissioned by The Changing Room Stirling as part of Wallace 700 celebrations.Primary school children from Bannockburn worked intensively with McIntosh on animation and painting which explored issues around the death penalty and civil rights, using Wallace’s execution as a historical basis. More here.

Made in collaboration with the whole Gibb family from Saltcoats, an intimate self-portrait of their life within an Ayrshire housing scheme, edited from their own multiple cinematography and inter generational point of view. McIntosh spent a full year in collaboration with them as part of the Pixelcurious resource which facilitated one to one working relationships between artists and mothers using a local nursery. The film was published as a DVD to accompany the book Not You Not I Neither Us Nor Them.Available on request.

Commissioned by Jason E Bowman for Beckett Time at Tramway, Glasgow.”Us” is a portrait of the artist’s parents constructed by themselves. “I gave them some calico and asked them to make life size replicas of themselves using only whatever else they had in the house.My father stuffed himself with an old sleeping bag. My mother, I cant remember what she used.She hated her face and she turned it over at the last minute to draw a new one. She made herself some hair from black wool. They used their own clothes to dress the dolls and in my absence they took photos of themselves sitting beside their dolls and some of the cat sleeping on my mother’s doll.”

A hybrid documentary which traces the musical influences on a Siberian boy from childhood through to present day. Misha Maltsev wrote to the Beatles from behind the Iron Curtain and made friends with the boy who worked in his village hall so he could use the photo-copier to assemble his punk style fanzine.( He never actually heard the Sex Pistols until the end of the 1980s because of musical censorship in the former Soviet Union.)The film mixes live 16mm footage from Moscow with 3D reconstructions of Misha’s Siberian childhood. I am boy follows the collapse of the former soviet super power and the resulting freedoms and uprising in traditional music forms, influenced by new access to rock.
I am Boy was nominated for a BAFTA “Best Documentary” 2001 and has been screened at major festivals throughout the world. Funded byCineworks, Glasgow Film Office, British Council in Russia. Broadcast on STV Uk and SBS Australia, screened at Sheffield Doc, Melbourne Film, Creteil and various other international and national festivals. 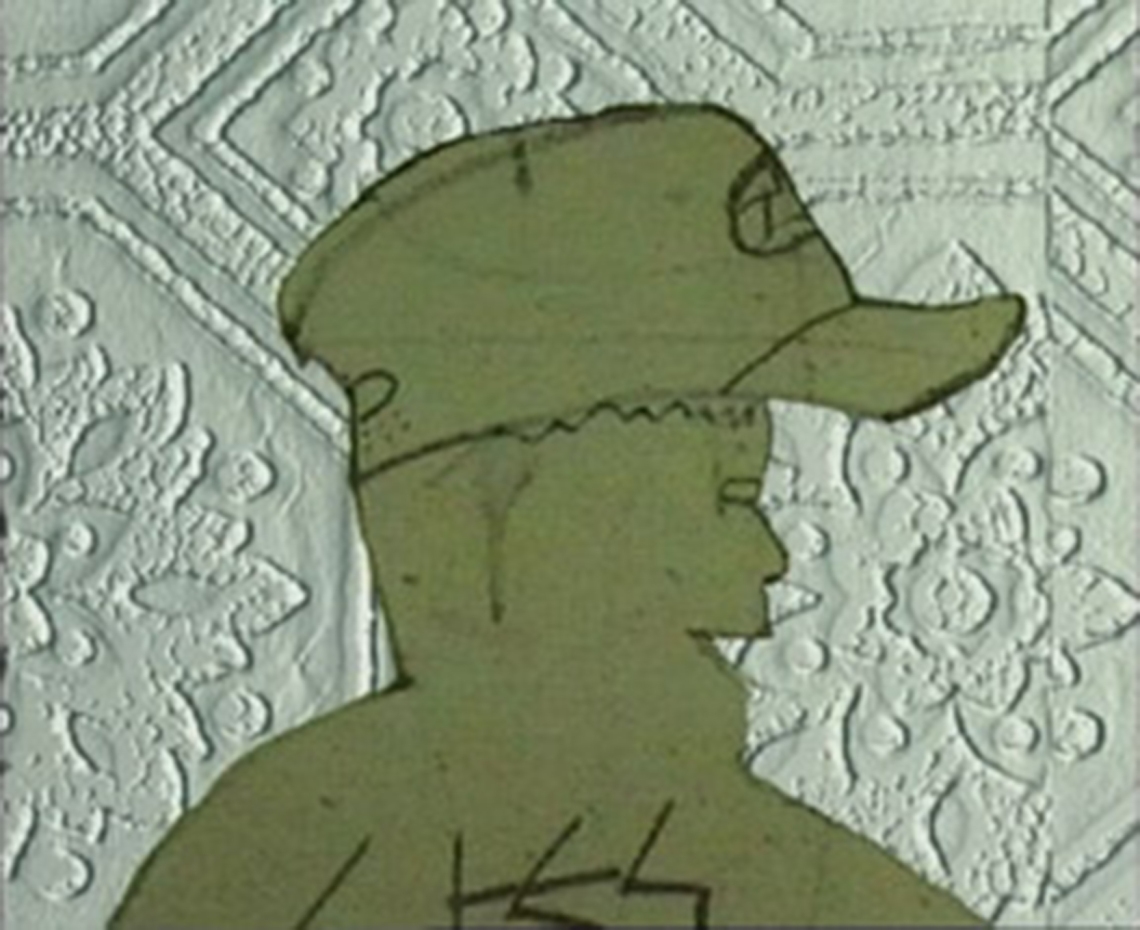 Commissioned by Channel Four, broadcast in 1999, A highly stylised documentary set in Glasgow housing schemes, which explores sites of (under-age) teenage sex outside the parental home. Looking at vulnerability, lack of personal space, gender issues and the nature of “an empty” slang term for a house where there are no adults.
McIntosh sampled sexually explicit grafitti from the Clyde Tunnel in Glasgow to illustrate the text and protect the visual identity of interviewees and used 3D animation to reconstruct specific events. Music by Ganger.

Filmed in County Galway, Donkey Skin is an expressive poetic tribute to a family of knitters and the intricate symbolic nature of Arran knitting. Featuring a blanket made of white bread and Maeve O’Regan, a singer and actress from Barna, as the iconic Arran Siren swathed in knitting. Soundtrack composed by Kaffe Matthews.Donkey Skin screened nationally and internationally at festivals including the International Women’s Film Festival in Madrid 1997 and twenty years later at Birds Eye View.