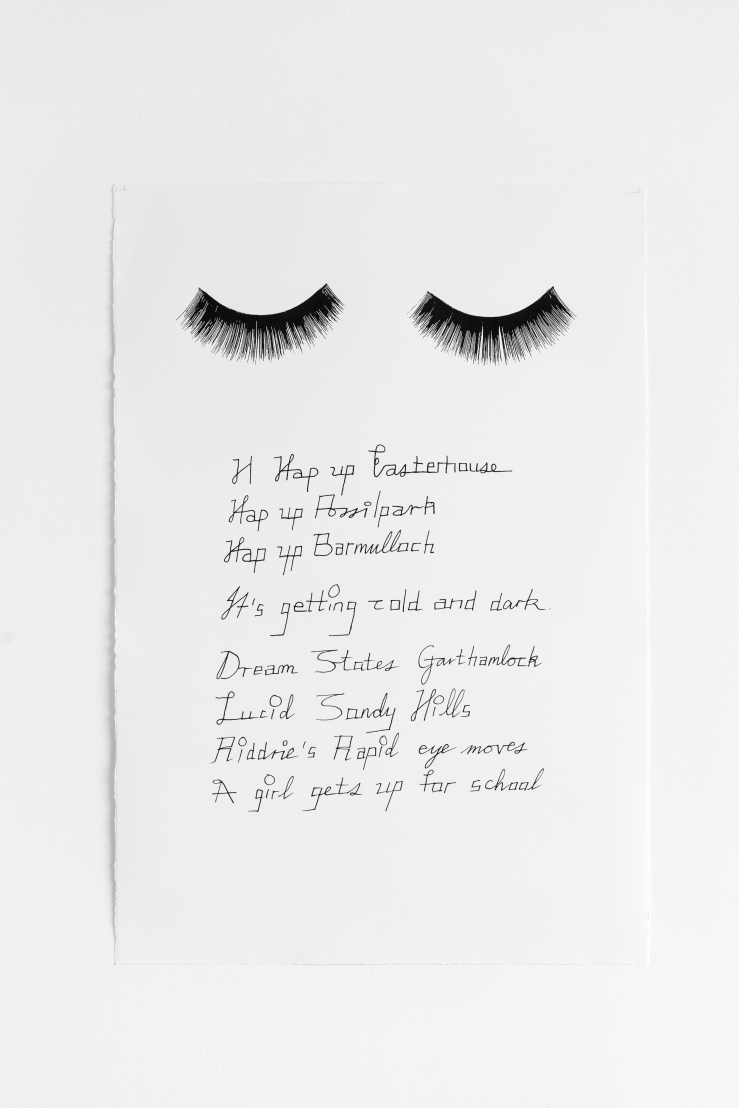 For 2016 Glasgow International Festival of Contemporary Art, Platform commissioned Mandy McIntosh to make new work over a six month period. Mandy was invited to engage with local people who use the building, and collaborate in a way that involved making things by hand. The artwork in the exhibition represents a reactive process based on weekly encounters between Mandy and both Platform’s knitting group who meet in the Café Bar and a group of young people attending the Transitions to Learning to Work course at Glasgow Kelvin College (GKC). Easterhouse itself also features as a character within the work, named amongst other Glasgow schemes as a unique place with its own aesthetics. 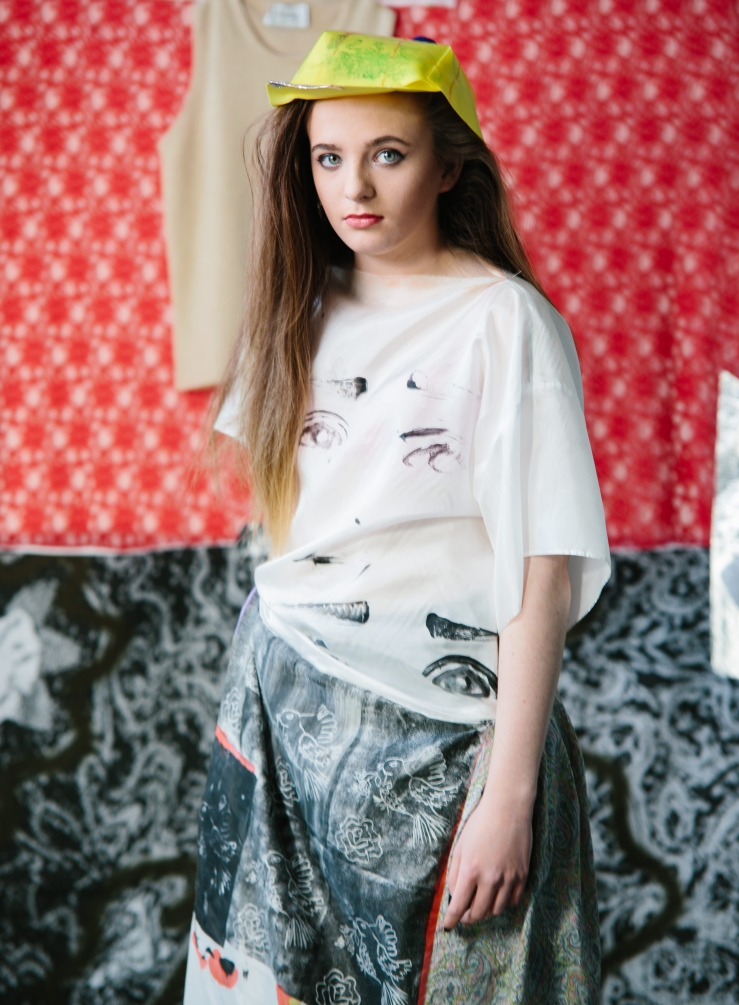 “The first time I met Anna she was wearing big false eyelashes. I gave her a glue gun and from a flat bright yellow plane of vinyl she fashioned a hat. She wrote “best bitches” on the front of it in green but the pen was water based ink and the words all smudged. I went nuts at how good the hat was, we videoed her in it. Gemma did cartwheels. Behind her, boys threw each other into the air like curly boulders. Later, David made a leather wallet but had nothing to put inside it. Liam made one sensational drawing of a guy wearing North Face jacket. Every week Anna and Gemma printed painted and embellished. Anna brought her sketchbook, containing striking drawings of a dinosaur, an oil burner, idealised women with pronounced abdominal muscles, Disney creatures and a scrolling rose. 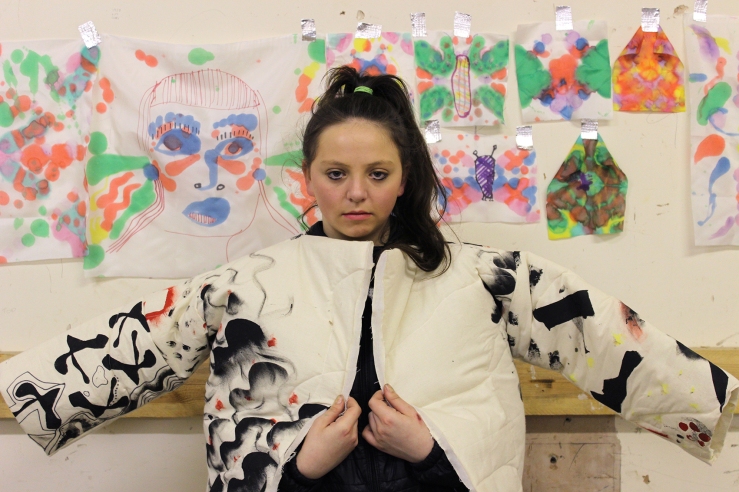 Gemma drew all the tattoos she would like to have, sometimes directly onto leather. Between us, fabric designs began to emerge, through primitive printing and painting techniques directly onto fabric. Then large scale digital prints which collaged scans with digital drawing and electronically acquired Liberty prints. Liberty being a historically high end cotton printer aligned with William Morris, the great original advocate of Craftivism.” 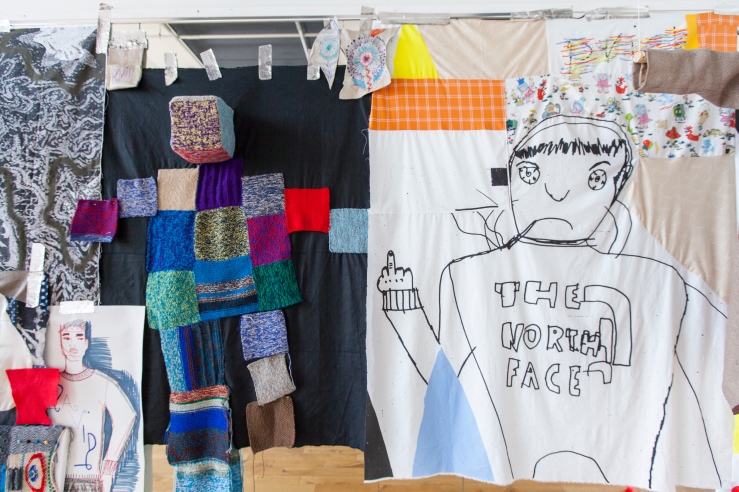 “The work with the knitters involved discussions around their craft and economics of labour and material, including the discrepancies between the calculations of the actual value of what they make versus a realistic price to sell hand knitted or stitched objects within this community. As a fellow maker, I was interested in the yarn choices made by Easterhouse knitters based on quality, cost and availability.

Amongst many knitters in Glasgow whose work spans generations, I have observed an increasing fret over the lack of “real” wool shops. A “real” wool shop would stock affordable wool of multiple colour and blend quality. There would be a ‘lay by’ option for customers, so that wool from the same dye batch could be bought by the ball, meaning the payments for the wool could be spread over time. The nature of patterns stocked would reflect the community needs, such as: Arran cardigans, school jumpers, baby clothes, shawls and any current fad, like Icelandic Lopi knits or mohair batwings.

Conversations I had with the knitters explored: the increasing gaps between boutique making, activity spurred by middle class craft revivalism; the sustainability of work by women on the commercial outskirts of that system; the effects of this on women who have always made things and want to be able to make more and crucially, how money can be made from selling their work in order to buy more wool” 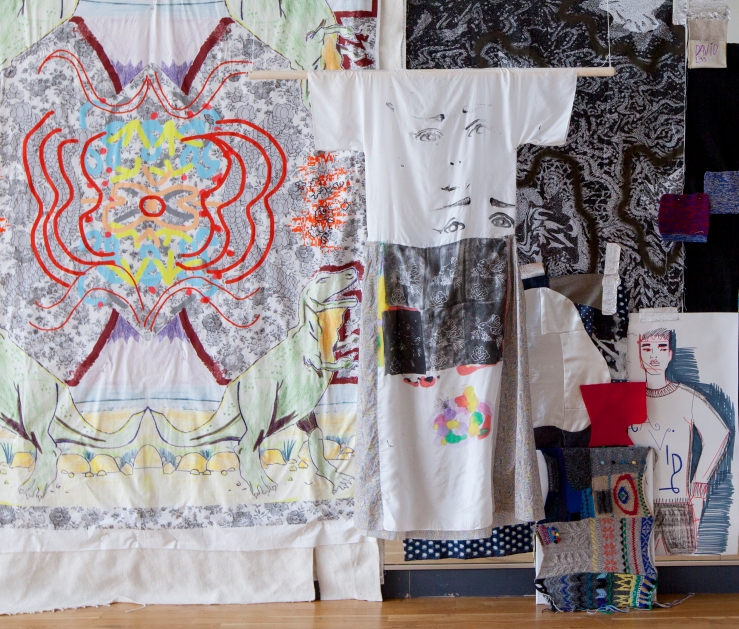 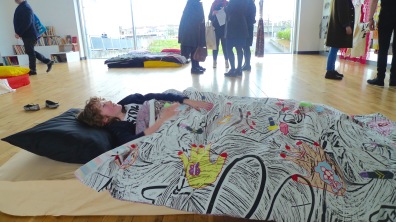 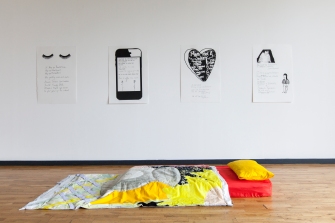 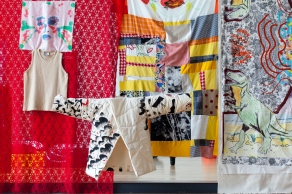 The artworks made between McIntosh, the young people and the knitters have been patched and reformed, as raw wall-based artwork. The wall resembles the visual board of a fashion house, honing a collection through sampling gathering and maquette. The layering reveals the infrastructure of processes before they are sealed, there are pins, batting is exposed, and ends have not been darned in. Digitally printed quilts with collaborative prints, have been cast on real beds, which the audience are invited to wrap themselves up in. On the floor are grids of individual coasters the women have stitched, their price is “four for a fiver”. Within a contemporary art context, “four for a fiver” has abstract value, in the real economy of Easterhouse, that’s how much the coasters cost. The work of the knitters has been reframed as raw modernist building blocks, referring to Minecraft, the Inuksuk emblem of Inuit culture and Lego. 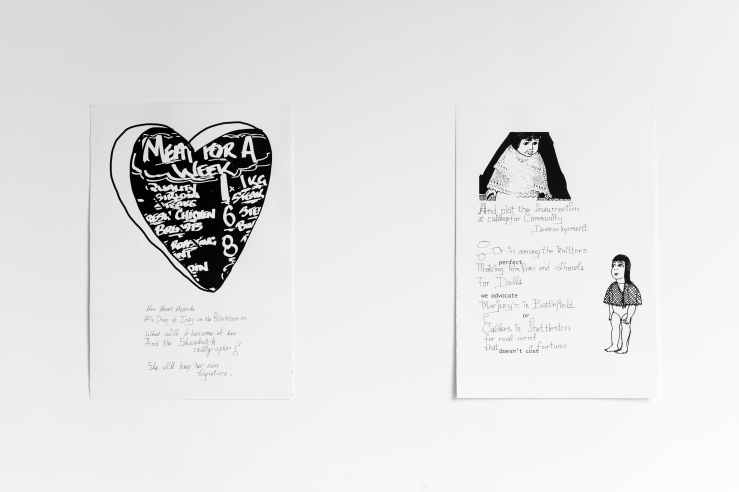 Haunted by the meat font,
She txts the scribe of the butcher.
Her phone
is also her mirror.
The scribe is wide,
they meet
when the schemes go to sleep.
He is in the year above her,
and he prices the meat.

McIntosh  also created a series of four screen prints that evoke a scenario in poetry and image which forms a more personal and reflective account of what Easterhouse inspired in her. The beauty of the writing on a butcher chalkboard, the potential of young people, the capacity for love and self-reliance. Often the knitters would show Mandy garments they had made for dolls. In the prints, the shawls for dolls imagery refers to revolutionary Glaswegian women who ignited social change while being happed up in knitting. Hap Up Easterhouse also features a display of Mandy’s personal library ofcraft related books spanning 35 years which people are invited to browse. The books span decades of craft instruction from the 30s to the 70s to present day including two volumes which feature McIntosh’s knit work, Knit Knit-Profiles and Projects from Knitting’s New Wave  and The Craft Companion, Thames and Hudson. 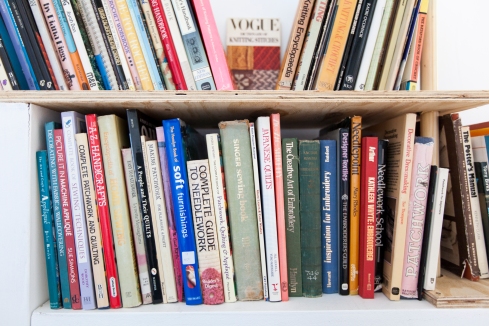 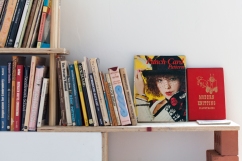 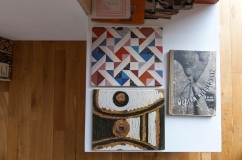 The text McIntosh wrote in response to Easterhouse for screen prints was also used as lyrics in a one off fashion show performance with Leigh Ferguson and Douglas Laing. This twenty minute live event took place at Outskirts 2016. McIntosh recently developed a videograph of this event which featured catwalk models, singing, drumming and prose recital. 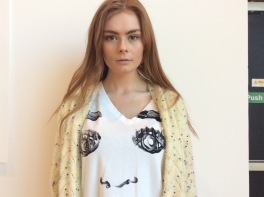 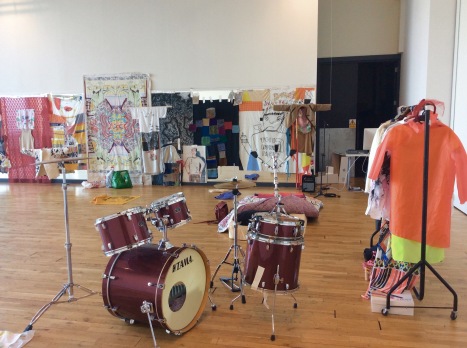